Another gorgeous Lowcountry Friday.  Sunshine, perfect temperatures (at least for this summer loving girl), breezes off the ocean, and so many flowers in bloom it is hard to pin down a single fragrance to love the most.

The frogs are in full throat.  The anoles are courting madly.  And the big snake that likes to frequent the back porch is just huge this year.

Have I told ya’ll about the snake?  Big one, as big around as the three year old’s wrist, loooong (as in when the back is twined around the limbs of the bush beside the door, the front end is already curled inside and down along the leg of the desk inside the door), so probably about 4′, and totally gorgeous.  When we saw it coming inside the first time this spring we were afraid the kids slamming through the door might hurt the snake…so we slipped it’s tail off the branches and let it slide on into the porch and out of sight.  Next time I saw it, it was headed out of the porch under the door… I happened to open the door and there it was.  So I knelt down and gently caressed it’s back and down it’s tail.  It paused, raised it’s head and looked back at me for a long time as I continued to stroke it.  I told it what a lovely animal it was.  Then it sort of ‘shrugged’ (if snakes had shoulders, lol) and slipped through my hands and went about it’s business.  Now when it sees me, it doesn’t slither away but waits to see if I am going to stop to pet it or not.  I think we have an understanding.

I also think it is a female…and quite possibly gravid, based on just how heavy it has gotten.  Won’t that be exciting?  Lots of little snakelings racing about the yard?  😀

now for the fantasy part… the lovely reptile reminded me of my current wip… and the drachen that live in that world.  Not ‘dragons’ in the sense we, especially in the West, think of them but actual reptiles and coming in a variety of shapes, colors, sizes, and habitats …as most species do.  Some have no legs, some aquatic, ones with wings have only two as the forelegs have become wings (no six-legged reptiles here 😉   Nor do they spit fire, although they can be fearsome creatures…particularly some of the larger ones…they are also intelligent and fiercely loyal.

I rather like this one, although the one I am most partial to in my story has ram-type horns (as some dinosaurs did) What seems like a lifetime ago I used to post Fantasy Friday pictures and prompts.  Sometimes they were interesting snippets or interesting concepts which, with a weird and rampant imagination like mine can lead to very odd places at times.  Others they were photos or pictures of artwork of interest.

I love to see where other peoples’ thoughts and creativity takes them.  There is beauty and wonder in even the mundane.

Today is a Friday…and filled with wonders…and more than its share of the mundane as well.  Somehow here, on this first Friday of this new month, it seemed like a great time to bring back a little fantasy fun.  What do you think? Finally, after long weeks …months… of stubborn determination that somehow she would hatch her (unfertile) eggs… Scooter gave up.  She pushed her final egg from the nest and came up to the top of her cage to feed for the first time since she began sitting.

Now I have cleared her sad reminder of no much wanted nestlings and she is happily shredding her new bedding.  Welcome back, Scooter.

There has been a lot of ‘letting go’ this month.  Leaving NY and my beautiful daughter, hubby, and Squid there.  Letting go of a many decades old friendship… trying to find the new left within it…and accepting that this introvert must let go and allow ‘new’ friends inside. So outside my comfort zone.  Time for changes.  Time to let go.

And I let go of Khyr.  I finished those first edits and handed him to my beta readers.  So scary.

And then sat here in total disbelief that for the first time in …how long… I don’t have Khyr to keep me company.

It isn’t I don’t have lots of stories started to play with…but the ones I do ‘for fun’ are not my big loves… not my Aerlinn or Khyr.  So Mathias, Ronyn, Nevar, and Luach will wait…and I will play with them each in turn between major writing sprees on whoever comes to fill this enormous void Khyr has left.

And then he came. His name is Truian (True-yen…with a very soft second syllable)  and we are still getting to know each other but I already feel how strong, and stubborn this man is going to be,  And he loves dragons.  Who can resist that?

So in keeping with our introduction to Truian…  dragons for Fantasy Friday.  Enjoy! September!  how the heck did it get to be SEPTEMBER already?  The days are already getting shorter and soon the ninnies…err powers that be…shall insist on depriving us of our lovely daylight savings time and once more all things will begin in darkness.

Most of my friends are running gleefully into fall.  I am hanging onto summer with fingers and toes, screaming:  NOOOO!  Don’t leave me!

Still the month holds much joy.  A trip to Long Island to see my beautiful daughter, amazing son (why do I have to keep adding the dang “in-law” part.. ) and their awesome little Squid. And my Reesie is there.  And Kris.  Going to be wonderful and Spud is going too.  Even better.

and KHYR’s edits are completed!  so Judah can have a read ….whenever he has time away from his post-grad novel… also fun!  And to celebrate,,, here is our FANTASY FRIDAY picture…. Today AJ and I went to check out an alternative school for him.  They were having a meet and greet at the local Sky Zone trampoline park.  He got to jump for a couple of hours while I spoke with teachers, parents, and other school people.  The school appeals to him, so tomorrow we will begin the enrollment process.  Would love to have him out of this school and into the new one by the end of the month.

Vegetables are coming in fast and furious in the garden now with the time quickly approaching for me to begin replacing summer crops with fall/winter varieties.  I am always excited to have new things available, but a little sad to see the growing days of summer come to a close.

There are still days of sunny visits to local farm markets… time to load in a few more batches of produce to put up before summer ends.

And  time to dream about stories to write.  With Khyr now well in hand (I expect to finish edits by the end of September) I will need to start thinking of what I want to write next.  So many choices…so little time.  Selkies. Dhampir. Dark Walkers. gean-cánach.   So many stories to tell…and still not sure which way to go.

Which hero will lead me to the most interesting possibilities?  We shall have to wait and see. Leaving the real world for a bit tonight.  It was a lovely week, crazy busy, but good.  And around all the everyday crazy I have plowed through my revisions and edits and in the process discovered an entirely new story I can’t wait to tell.

This one is far different from the fantasy I am writing.  (If you missed my being a fantasy lover/writer… you might not have been paying attention, LOL)  Khyr’s story (written and being madly edited at present)  is a little different from traditional epic… the worlds are not medieval …and one of the worlds is a contemporary earth.  But the new one…niggling madly at me…is very different from those worlds I know and love so well.

There IS technology…just not the kind we have.  No fossil fuels. I am actually very excited to begin world building for this one. It will be a whole new adventure since I will have to develop a logical world with inventions and technology and a society to ‘fit’ what my MC is showing me.

So …following that premise I decided our Fantasy Friday picture should depict something that inspires me in the way that world my develop.  Here it is.  What do YOU think this world would be like?

A week into August already!  Where has this year gone?  It has been a roller coaster….with a lot more steep racing downs than highs…but we live for those moments when things look up.  When we can see far in the distance…hope that everything will be all right. 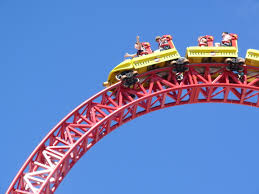 I am gearing up for a big push to get these edits done on Khyr’s story.  I am only 1/2 done and hitting a hard stretch with a lot of new scenes and scenes that have to be rewritten.  Hard….but exciting.  Sort of like that roller coaster of life.

And on that note we need a breathtaking moment for Fantasy Friday!